Jenny Hall explores how 'my' expectations can skew the senses which leads to misunderstanding the nature of a situation.

“First of all a Bhikkhu must guard his senses, be calm and obey the right rules.”

This verse points to the fifth link of the Twelve-Linked Chain of Conditioned Arising – The Six Senses.

An object is named (fourth link), and this naming is carried out by the delusion of ‘I’ (first link). This delusion obscures the clarity of pure sense perception.

The senses are a precious gift. When an object comes together with a sense organ the sense organ’s consciousness arises. It is not ‘my’ sense-consciousness.

As we wholeheartedly walk through a woodland on a summer’s day, the blackbird’s call comes together with the ear and the sound is heard. We are one with it. Master Daiyu Myokyo said, “Genuine insight arises when a sense contact reflects in the empty heart.”

“First of all a Bhikkhu must guard his senses…”

The Buddha taught, however, that we are rarely given away into ‘just walking’. The passions muddy pure sense consciousness. He said that sense organs, objects and sense-consciousness are ‘on fire’. They are burning from the flames of desire, hatred and delusion.

It is rather like watching a film on T.V. made up of many little changing pixels. When the DIY enthusiast next door starts drilling into the wall, the picture and sound of the T.V. become obscured. Our emotions obscure the sense impressions in the same way.

An elderly neighbour telephoned asking for help. Rather than giving myself wholeheartedly into going downstairs, opening and closing the door and walking across the close, I rushed across to her house. As soon as she opened the door, the eyes saw piles of clothes, washing-up and papers everywhere. ‘I’ immediately judged this as ‘disturbing’. Instead of meeting aversion as it arose, energy was frittered away in the thoughts concerning how ‘I’ was going to deal with the mess. Where would ‘I’ find the time? All this happened so quickly, and together in succession created the impression of a ‘me’ assessing the situation.

“… be calm and obey the right rules.”

The Zen training helps us to recognise and give space to the emotional energy as it arises. The sense impressions are then free to communicate without ‘my’ interference. The wartime motto: ‘Keep calm and carry on’ is an expression of this.

Giving ourselves into sitting zazen, suddenly a dog barks. The ear takes in the sound. There is pure sense consciousness. There is no ‘I’, just a flowing and at-one-ment with the barking. If ‘I’ resist it then the sound becomes ‘muddied’.

My neighbour needed an ambulance. The emergency encouraged a giving myself into calling ‘999’. When the ambulance arrived an alert listening and answering was required as the crew asked questions. Once my neighbour was in hospital the desire to take control of the ‘mess’ arose again. This time it was embraced. When ‘choiceless awareness’ opened it was seen it would be inappropriate to ‘take charge’.

Visiting her in hospital she asked me to cancel her milk and newspaper orders. This led, quite naturally, to asking if she wanted the old bottles of milk removed from the fridge and the old newspapers recycled. As each answer was heard it was possible to be guided by her needs. The dirty milk bottles required washing. To create space in the sink, the pile of washing-up that had accumulated was addressed. One task let quite naturally to another. We don’t need rules to guide us. If ‘I’ don’t interfere with all my judgements and intentions, then the senses perceive what is required. Zen Master Bankei called this: The ‘Unborn’.

The Unborn Mind is the one who when meeting objects of the six senses reveals everything that is seen, heard, felt or thought.

When Satish Kumar embarked on his Peace Walk around the world, he gave the leaders that he visited packets of tea. He was told to tell each head of state: “If you think of pushing the button to drop a bomb, stop for a moment, have a fresh cup of tea from this packet.”

We give ourselves into drinking a cup of tea. When it is sipped, tasted and swallowed it is seen directly that there is no separate ‘cup of tea’, there are just changing moments of knowing. There is no ‘I’ to judge that it is ‘too cold’, or ‘too hot’. 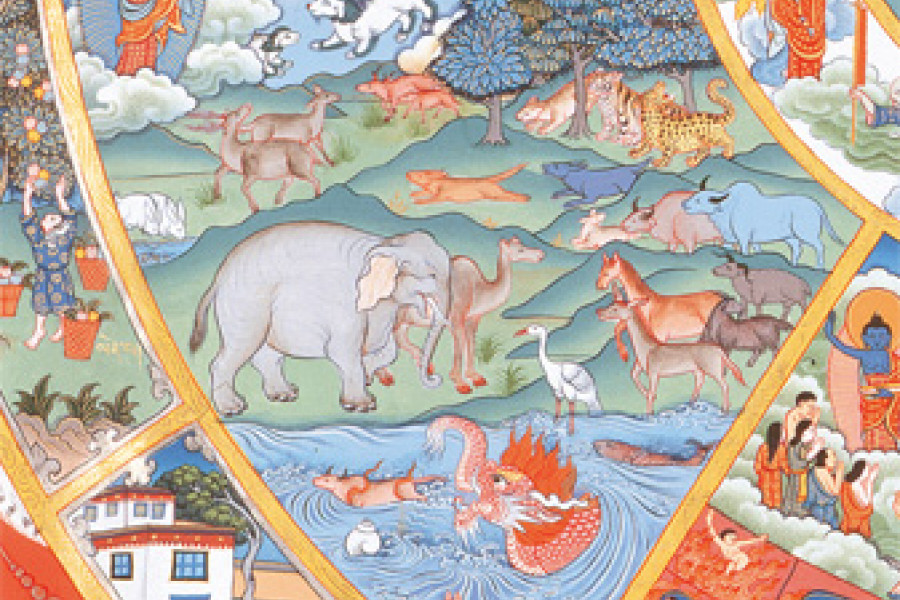 Dhammapada Verse 131 - Verses from the Dhammapada

The Buddhist precept not to kill may seem self explanitory, but we may be breaking this rule by the way we treat our...