All the Buddha’s disciples are too scared face Vimalakirti’s Dharma power, surely the future Buddha Maitreya will have what it takes to speak with the Boddhisatva.

As we all know, a Buddha is a rare specimen! However, he is by no means unique.

As a matter of fact, in the life of our current universe we are forecast to entertain 1000 Buddhas. Not that we need to worry about so many variations on the same theme competing with each other because these Buddha are well spaced out. The life of this universe is very, very long and there will be lots of time between them. This is just as well because it takes a long time for any being to become a fully fledged Buddha.

According to the teachings, the next Buddha is already in his heavenly waiting room poised for his final re-birth in which he will turn the Wheel of the Dharma once more. This of course will not happen for a very long time. First the teachings of the current Buddha, Sakyamuni, will have to deteriorate to the point of extinction. After this there will be a long period of time when there is no access to the Dharma.

Once this period is over the next Buddha will be born and he will be called Maitreya Buddha.

At the moment he is a Great Bodhisattva-Mahasattva and he spends his time in the Tushita heaven biding his time and maturing - like a good cheese!

Like all the great Bodhisattvas, Maitreya also gives a helping hand to current buddhas in all the universes, honing his skills for when it’s his turn. In fact, all the bodhisattvas are bound for Buddha-hood and help out at these large gatherings when a Buddha is about.

So it happened that our Buddha approached Maitreya and asked him if he wouldn’t mind paying poor Vimalakirti a visit to see how he was.

Unlike the arhats, who are all monks and wear very simple clothes, the Bodhisattvas are richly adorned with fine clothes and magnificent jewelry. This finery might seem too ostentatious for great spiritual beings, but these are meant to be seen as expressions of great spiritual powers and status. They are not the usual mundane bling of kings and emperors and their retinues. Like the Buddha, the great Bodhisattva-Mahasattvas (this last term means ‘Great Being’) have bodies that shine like gold when the sun strikes them and, even if they had to run a marathon and did not change their socks, they would still give off pleasant aromas.

So it was with some consternation that those close-by saw Maitreya’s face fall ever so slightly when the Buddha made his request.

“My Lord,” said Maitreya in a voice that thundered around the surrounding hills. ‘‘I am indeed reluctant to go and visit Vimalakirti!”

There was a definite sense of ‘Here we go again!’ amongst the expectant crowds.

“I was talking to the deities in the Tushita heaven the other day when up popped Vimalakirti saying:

‘So my Lord Maitreya, only one more birth between you and full Buddha-hood, is it?’

‘Yes’ I replied.  Frankly he had taken me by surprise.

‘Can you tell me, my Lord, is this birth to happen in the past, in the present or in the future? You see, the only reason I’m asking is that if it is the past then it has already finished. If it’s in the future then it will never arrive and if it’s in the present then it’s fleeting and is but a moment and cannot be the real Buddhahood which is eternal. If it is eternal then how can there be a prophecy which can only relate to a future time? So, will Buddhahood be something that is with you from birth or from death? Furthermore, as your nature is no different from the nature of all other beings, how is it that this prophecy is for you alone and not for all beings? How is it possible that you can realise enlightenment at a time different from all other beings in the three periods of time (past, present & future)? As you have sworn never to enter nirvana until all beings are simultaneously liberated, you must see that all beings are already liberated as are all Tathagatas. Why do you spend your time in this Tushita heaven making belief that you are awaiting your final rebirth before enlightenment when there can be no possibility of approaching or leaving enlightenment for any being at any time?”

Having heard his discourse, the deities of the Tushita heaven were all converted to the path of birthlessness and, as for me, I was speechless and perplexed. Therefore, Lord Buddha, I am reluctant to go and inquire after Vimalakirti’s illness.’’

You could have heard a pin drop! He was not the only one who was speechless that day.

So, the Buddha thought to himself, “This is becoming quite a headache. Vimalakirti stirs up even the highest of beings and yet there is no fault in what he says. His vows are stainless. In such circumstances it behoves us to proceed. The Dharma will sort this out so long as we do not give up.”

So, turning to Bodhisattva Jagatimdhara, the Lord Buddha said:

“And will you, Jagatimdhara, go to Vimalakirti?”

“If you insist Lord,” came the reply, although everyone knew what he really meant. HIs explanation was soon forthcoming:

“One day the great god Indra approached me with a gift of twelve-thousand maidens, saying that I could have them as my servants. I expressed deep shock and implored him not to make this gift as I am a religious person and cannot accept it.  At that very moment, Vimalakirti appeared saying that I was being taken in as this was not Indra but the tempter Mara. He turned to Indra:

‘You old goat, Mara! Pulling the wool over the eyes of this good Bodhisattva. You should be ashamed of yourself.’ He then laughed and said ‘I’ll tell you what. Why not give these 12,000 maidens to me and we’ll call it a done deal?’

Mara was terrified but he accepted the suggestion. He did as he was asked, even though it was against his will.

Vimalakirti then took the maidens, who were all goddesses anyway, off to a remote place and there discoursed on the pleasures of the Dharma as being by far superior to the pleasures of the flesh and all other desires. When he had finished, they all took the Four Great Vows of the Bodhisattva and dedicated themselves to perfect enlightenment. At that moment Mara caught up with them. Not wanting to lose his maidens, he made his plea to Vimalakirti:

‘My Lord, please give me back my maidens. As a great bodhisattva yourself you have no mental attachments to anything either inwardly or outwardly. Is it not your custom to give away everything? Please. I urge you to let me have them back!’

Vimalakirti smirked and said, ‘Very well Mara! If you really want to take back your gift, it is yours!’

But the goddesses looked crestfallen and turning to Vimalakirti rebuked him:

‘You have taught us to taste the pleasure of the Dharma. Yet you send us back to the realms of desire. How are we to disport ourselves in that realm?’

‘Well, there is a teaching for just such an occasion.’ replied Vimalakirti.

‘It is called The Inexhaustible Lamp. Sisters, this teaching says that the bodhisattva is like a lamp that can light a thousand other lamps from its flame without in any way diminishing its own light. So it is that you can return to the realm of desire and, with your own super-normal powers given by the deep meditational practices that you have been shown, turn other beings there towards the pleasures of the Dharma.’

The goddesses seemed quite satisfied with this outcome and with a knowing smile returned with Mara to his abode.

‘And so’, concluded  Jagatimdhara, ‘I was left so dumbfounded by this spectacle of wisdom and magic that I am also very reluctant to go and see poor Vimalakirti.’”

It became apparent to the Buddha that, as with the arhats, every one of his mightiest bodhisattvas was reluctant to visit Vimalakirti and enquire after him.

“Well,” said the Buddha to no one in particular. “I guess that leaves only one being who will do the deed. Great Bodhisattva of Wisdom-Gone-Beyond, Manjushri, will you go and visit Vimalakirti?”

Up the creek with only one paddle left. Can the princely Manjushri rise to the occasion? Will the Buddha be left in the lurch? Read on to find out where this party finally stops.

While doubt is seen as one of five hindrances to meditation, ‘the great ball of doubt’ is one of the three requirements for Zen training. What is this ball of doubt and how can we develop it?

Having heard news of Vimalakirti’s illness, the Buddha sends his top men to find out what’s wrong with the Boddhisatva, but all the Arhats seem suspiciously reluctant to go. 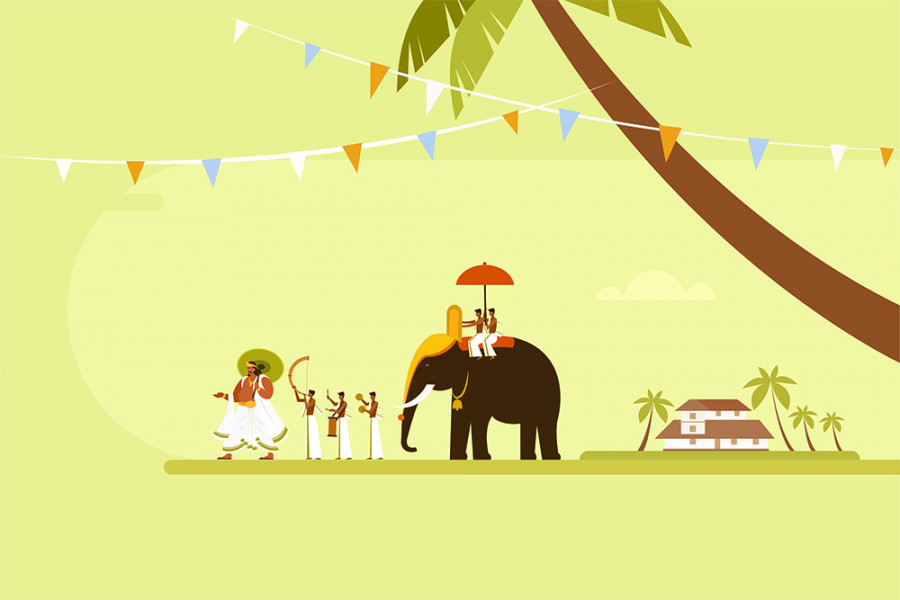 The Bodhisattva’s sudden illness even has the King worried, what is Vimalakirti up to?